Remuneration of Directors and senior Management

Delegation by the Board

Delegation by the Board CN

The board of Directors (the “Board”) is responsible for overseeing the business and strategies of the Company and its subsidiaries (collectively as the “Group”) with the objective of enhancing value for its shareholders.

A summary of the Board Diversity Policy is extracted below:

The Company endeavours to ensure that its Board has the appropriate balance of skills, experience and diversity of perspectives that are required to support the execution of its business strategy for sustainable and balanced development. In designing the Board’s composition, Board diversity has been considered from a number of aspects, including but not limited to gender, age, cultural and educational background, professional experience and skills. All Board appointments will be based on meritocracy, and candidates will be considered against objective criteria, having due regard for the benefits of diversity on the Board.

The Nomination Committee will report annually, in the Corporate Governance Report, on the Board’s composition under diversified perspectives, and monitor the implementation of this Board Diversity Policy to ensure that recruitment and selection practices are appropriately structured so that a diverse range of candidates are considered.

The factors listed below would be used as reference by the Nomination Committee in assessing the suitability of a proposed candidate.

These factors are for reference only, and not meant to be exhaustive and decisive. The Nomination Committee has the discretion to nominate any person, as it considers appropriate.

The Board comprises 10 Directors as at the date of this report. The Board members are as follows: 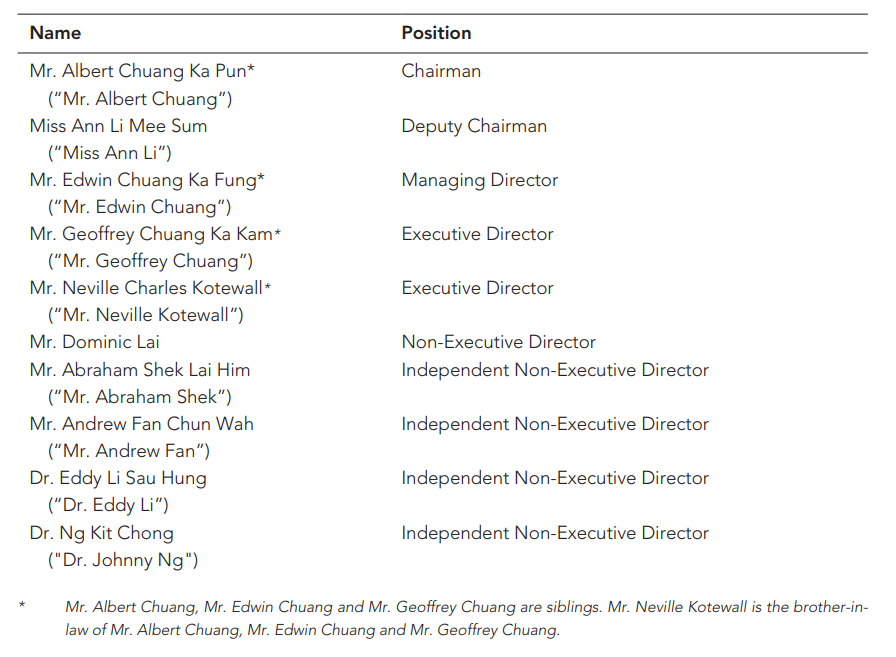 The composition of the Board is well balanced with each Director having sound knowledge, experience and/or expertise relevant to the business of the Group. The Board has on a regular basis reviewed the composition of the Board and the skills and experience required for all the Executive, Non-Executive and Independent Non-Executive Directors of the Board, in the context of the business and strategies of the Company. Each of the Directors’ respective biographical details are set out in the section headed “Biographical Details of Directors and Senior Management” of this annual report.

There are formal, considered and transparent procedures for the appointment and removal of Directors. All Directors newly appointed to fill a casual vacancy are subject to election at the first general meeting after their appointment. Every Director is subject to retirement by rotation and re-election in annual general meeting at least once every three years. All Non-Executive and Independent Non-Executive Directors are appointed for a term of three years, subject to retirement by rotation and re-election as aforesaid.

A Nomination Committee was established by the Company with clear terms of reference. The Nomination Committee currently comprises three Independent Non-Executive Directors, Mr. Abraham Shek, Mr. Andrew Fan and Dr. Johnny Ng. The committee met once during the year to review the structure, size and composition of the Board and to assess the independence of each Independent Non-Executive Director.

The attendance record of each committee member is as follows:

The Board held five regular board meetings during the year. Arrangements were in place to ensure that sufficient notice and adequate information were given to each Director prior to the regular meetings. The Chairman, together with the Deputy Chairman and the Managing Director, established the agendas for the meetings. Other Directors were invited to include items in the agendas. Minutes of the meetings were kept in sufficient details to reflect the decisions made in the meetings.

The attendance record of each Director in Board meetings is as follows:

According to the code provision C.1.4 of the CG Code, all Directors should participate in a programme of continuous professional development to develop and refresh their knowledge and skills to ensure that their contribution to the Board remains informed and relevant. The Company should be responsible for arranging and funding training, placing an appropriate emphasis on the roles, functions and duties of the Directors of the Company.

During the year, the Company had arranged seminar and provided reading materials to the Directors that are relevant to their duties and responsibilities. A summary of the training record of each of the current Directors received by the Company is as follows: 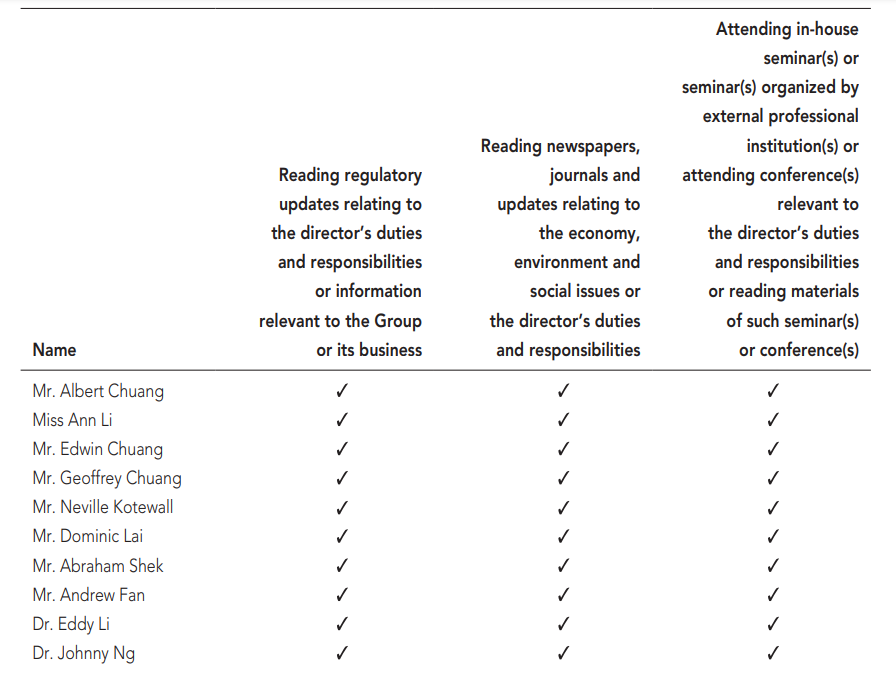